By Ollie Lewis For Mailonline

The UFC 251 headline act has been called off after one of its competitors, Gilbert Burns, tested positive for coronavirus, leaving Dana White with a late scramble to find a replacement.

The event, set to take place on ‘Fight Island’ in Abu Dhabi’s Yas Island on July 11, was scheduled to see Kamaru Usman defend his welterweight title against Burns, who has come off the back of a strong display against former champion Tyron Woodley.

However, the Brazilian, his coach Greg Jones and his brother Herbert Burns all tested positive for the disease and as such the challenger has been pulled out the contest seven days before the event. He had been training in Florida and travelled to Las Vegas to undergo final testing before flying out to the Middle East from one of the UFC’s ‘hubs’, but the positive result meant that Burns and his team did not board the specially-chartered plane for the fighters.

It means that UFC chief White has less than a week to find a suitable replacement for the 33-year-old. If no replacement can be found, featherweight title fight between Alexander Volkanovski and Max Holloway is expected to headline the show.

Burns shared his devastation at missing out on the iconic event, tweeting earlier today that he’s ‘not feeling well’. Burns has been pulled from the card, leaving Dana White with a late search for a replacement 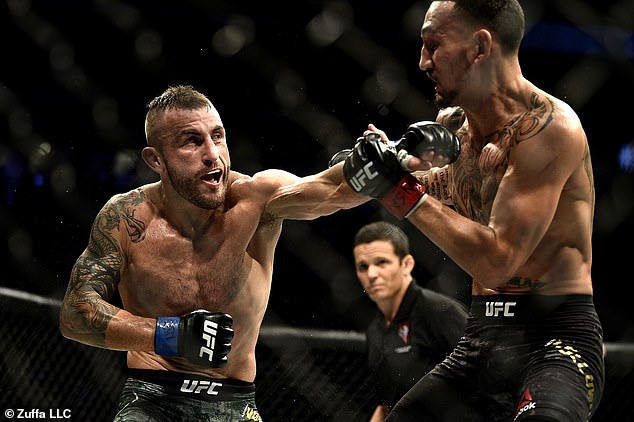 If no stand in is found, Alexander Volkanovski’s title bout with Max Holloway will be main event

Fans are excited to see how the event will unfold next Saturday, with the UFC hosting four events at the unique location over the course of this month.

The premise of ‘Fight Island’ arose in April, when UFC chief White was determined to find a suitable location to host the lightweight title bout between Khabib Nurmagomedov and Tony Ferguson, after the Barclays Center pulled out of hosting duties amid the coronavirus pandemic.

A mysterious ‘Fight Island’ developed as a lead contender to host the event, although details of its location were unknown. 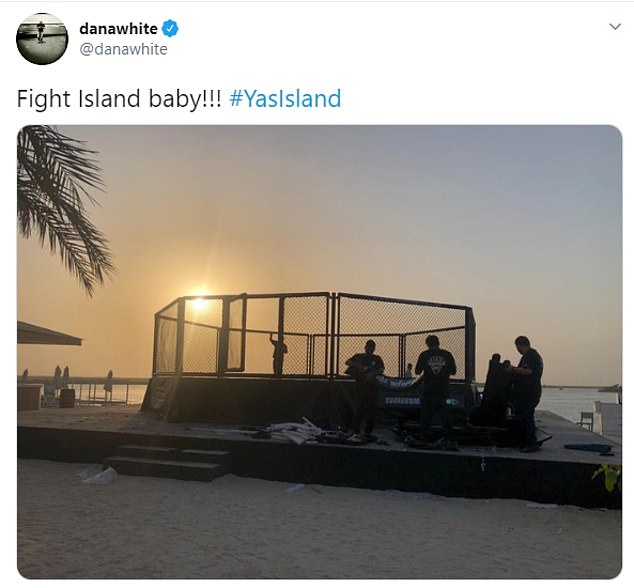 UFC 251 will take place on ‘Fight Island’ in Yas Island, Abu Dhabi in a historic event on July 11 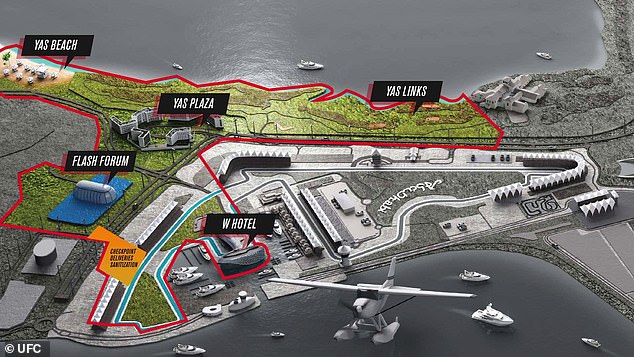 However, UFC 249, was hosted at the VyStar Veterans Memorial Arena in Jacksonville, Florida on May 9. Ferguson faced Justin Gaethje instead of Nurmagomedov after the Russian was unable to enter the United States.

Gaethje caused an upset and stole the show after stopping El Cucuy in the fifth round, setting up a title matchup with the undefeated Dagestani.

White has sought to repay the faith of those looking to bring the UFC to ‘Fight Island’ with details emerging that the venue was Yas Island, Abu Dhabi, and the American is close to seeing his ambitious dream realised.

Last week, White shared an image of an Octagon on the beach, in what will prove a stunning image for fight fans when they watch the action next weekend.

Known as a billionaire’s playground, there are seven large hotels around the island, and three UFC events have previously been held at this location.

There have been concerns about the effect that the heat will have on fighters.

How Small Is Apple’s Smallest iPhone?