‘All goalscorers are greedy at times… he takes it to another level’: Graeme Souness praises ‘selfish’ Mohamed Salah for his desperation to win the Golden Boot after another impressive performance for champions Liverpool

‘Selfish’ Mohamed Salah’s insatiable appetite for goals is on a whole new level to his rivals in the eyes of former Liverpool boss Graeme Souness.

But rather than criticise the Reds attacker for his tunnel-vision, Souness was full of praise for Salah after he netted a brace against Brighton to boost his Golden Boot credentials.

The pair of strikes, which were decisive in a 3-1 win on the south coast on Wednesday, took Salah’s league tally for 2019-20 to 19, placing him third in the scoring chart behind Jamie Vardy (22) and Pierre-Emerick Aubameyang (20). 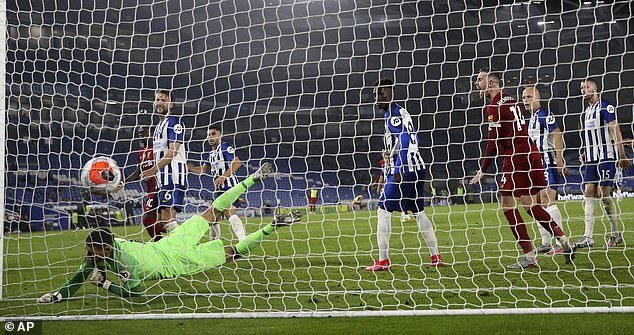 Salah took his tally in the Premier League this season to 19, the third highest in the division 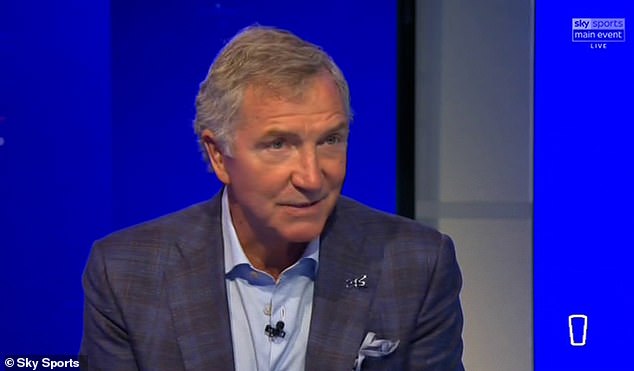 Given Liverpool have mathematically won the Premier League title ahead of second-placed Manchester City, Souness backs Salah’s selfishness in chasing the scorer’s title.

‘He was at it tonight, wasn’t he? From the first minute,’ Souness said on Sky Sports.

‘It’s important to him, you see his reaction when people weren’t finding him late on in the game.

‘He was shooting at every opportunity, his team-mates wouldn’t have been happy on two or three occasions. 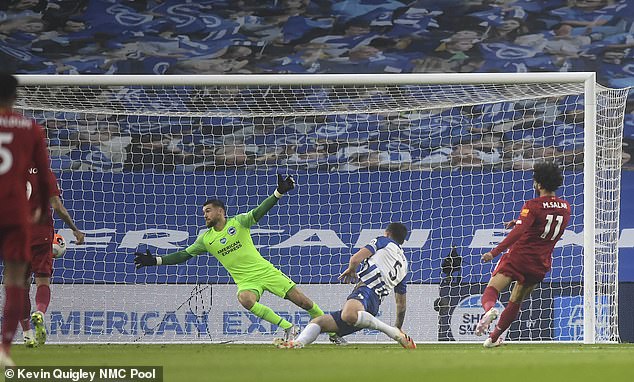 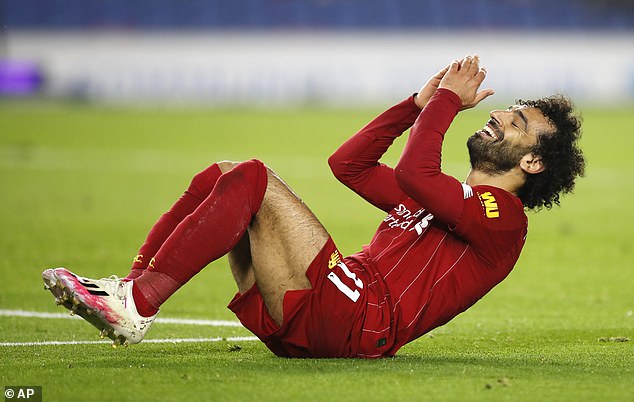 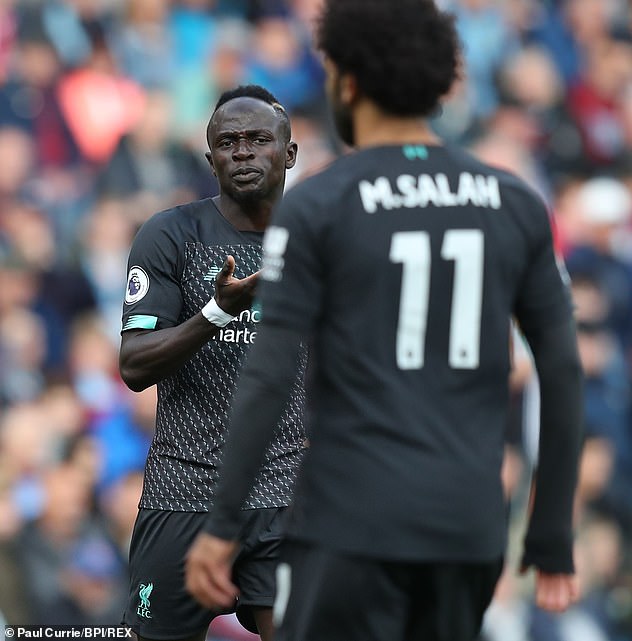 ‘Tonight he’s been selfish but that’s because he wants that golden boot.

‘They’ve won the league title, he’s done his part and he thinks it’s there for him. (Sadio) Mane has fallen out with him in the past on occasions where he feels he should have passed to him.

‘All goalscorers are greedy at times, I think he takes it to another level.’

As Souness touched on in his analysis, while he was full of praise for Salah’s selfishness, it has caused ructions on occasion this season, none more public than with Sadio Mane away at Burnley back in October.

Mane appeared to visibly become frustrated with Salah when he was not given the ball in the final stages of a win at Turf Moor.

Liverpool were up 3-0 at that moment and bearing down on goal, Salah elected to try his luck himself rather than square unselfishly for Mane, who was still seething when he was taken off and subbed by Jurgen Klopp.

The pair later addressed that the incident was ‘forgotten’ and they have clearly buried it having been a dominant force en route to their first league title in 30 years. 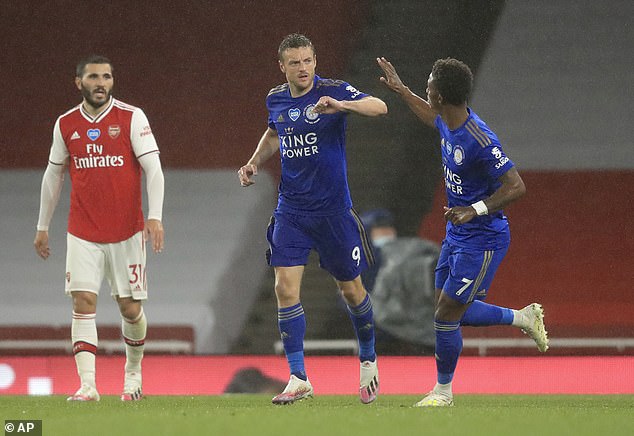 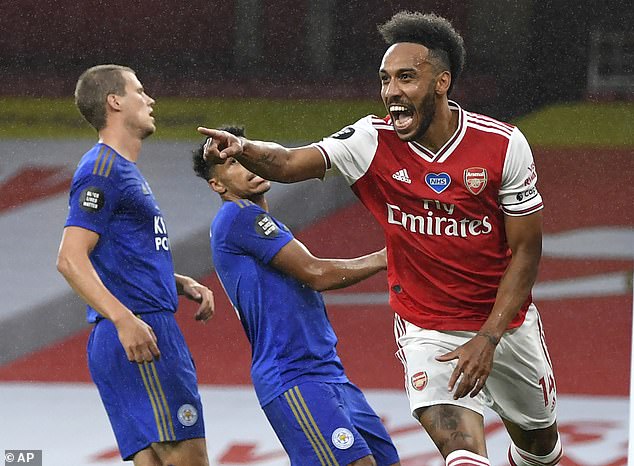 Both Vardy and Aubameyang got the goals as Leicester and Arsenal played out a 1-1 draw in north London on Tuesday night.

Salah has won the last two Golden Boot titles and is targeting a famous treble having become one of the most potent forces in English football since his move to Anfield.

Salah’s brace closed the gap on his two main rivals by one and despite Liverpool having already sewn up the title, the Egyptian is taking to the pitch with plenty of motivation between now and the final game to usurp both Vardy and Aubameyang.

His record this season is for a goal every 137 minutes and Liverpool have missed him when he has been out of the side – no performance more glaring than the Merseyside derby to mark their return to action after the restart.

He has nine assists to go with his 19 goals and while his focus is on posting as big a scoring number individually as he can, Salah admitted after the Brighton win that he ‘does not know why’ his assisting numbers get overlooked. 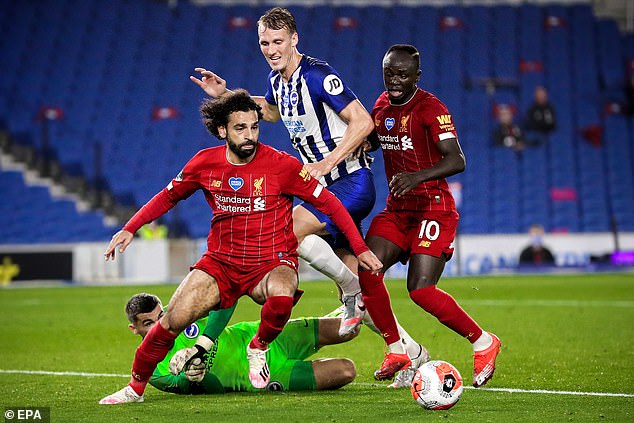 Sofia Richie Has Dinner Date With Matthew Morton at Nobu

Trailer and poster for thriller Fishbowl

The Masked Singer Season 4: Who is Serpent?

How Floki’s Real Death Compares To The Show