There is an unwritten rule at Real Madrid that players over the age of 30 only get their contracts renewed one year at a time.

If Sergio Ramos delivers this year’s league title as seems likely, then rules might have to be bent for the Real Madrid captain.

At 34, Ramos is showing no signs of slowing down. Few players look to have come back from three months without squad training in such good condition. Suspension will rule him out of the team’s next match on Friday, if not that, he would have started every game between now and the end of the season. 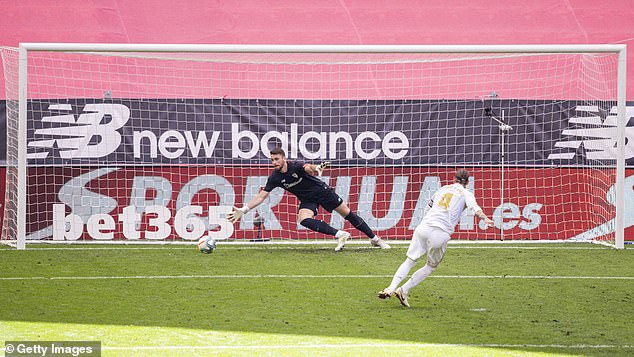 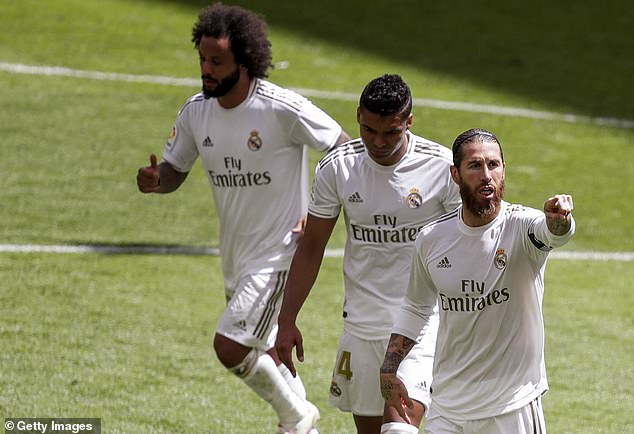 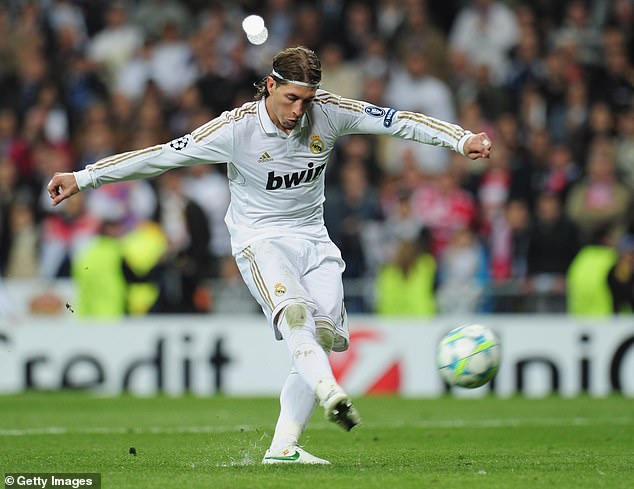 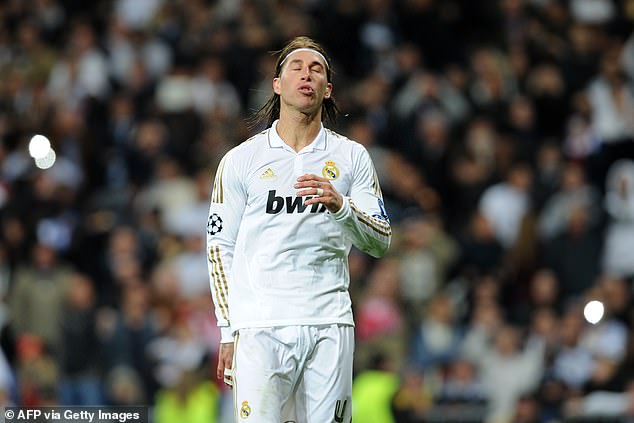 He is the club’s top scorer since football restarted, with five goals across the seven straight wins. Three of those goals have been from the penalty spot where his style of waiting for the keeper to move is at the moment proving unstoppable.

If they dive he floats it over them, if they don’t he sticks it in the corner and they move too late to get it. It’s a win-win if you can hit the ball hard enough despite having used the run-up not to build momentum but to try to read the keeper.

Ramos has now scored 22 straight penalties, including shoot-outs. And all that from someone who missed one of the biggest penalties in his career back in 2012.

Real Madrid had won the league that season and, coached by Jose Mourinho, they believed they were on course to win the Champions League too. But in the semi-final shoot-out with Bayern Munich, as then Madrid coach Jose Mourinho recalls it: ‘Three monsters of football, Ramos, Kaka and Cristiano Ronaldo’, all missed from the spot.

Ramos was the butt of most of the jokes because his kick sailed high over the bar.

How did he respond to the failure and the subsequent fun-poking at his expense? He scored his next big tournament spot-kick with a Panenka-style chip of course.

He says after the Champions League failure he went home and told his dad and brother that his next penalty would be a ‘Panenka’.

The Euros were looming so he might have known it would be another big one. He practised pre-tournament although Spain coach Vicente Del Bosque told him he wouldn’t have the nerve to do it. 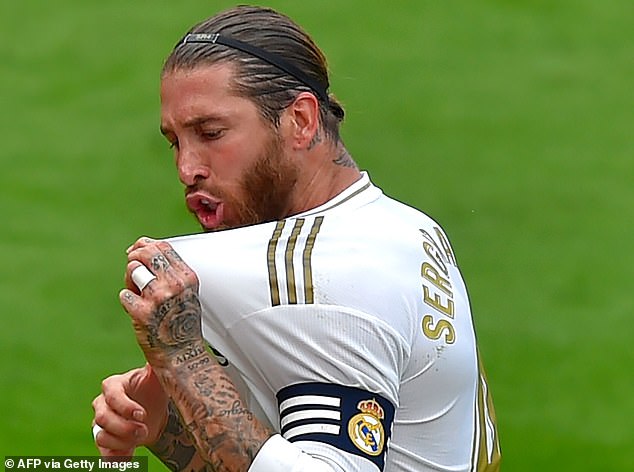 And then against Portugal in the semi-final he floated the ball over the dive of Rui Patricio to help send Spain into the final.

Buried deep in the tapestry of tattoos that cover Ramos’ body he has the Nelson Mandela phrase: ‘unconquerable soul, master of my own destiny’.

It’s all part of the larger-than-life persona. His rebirth from penalty-flop to spot-kick king is part of that. 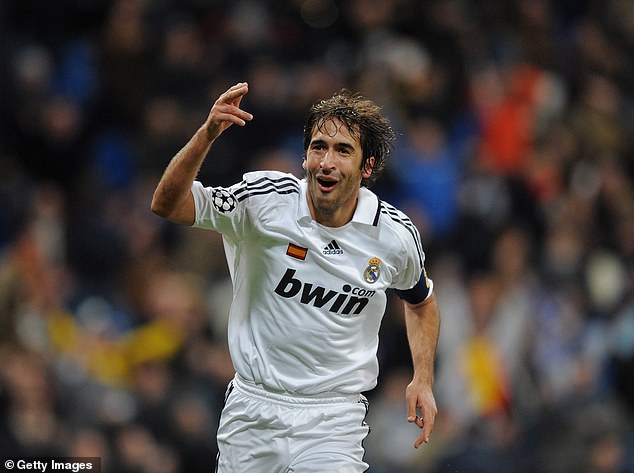 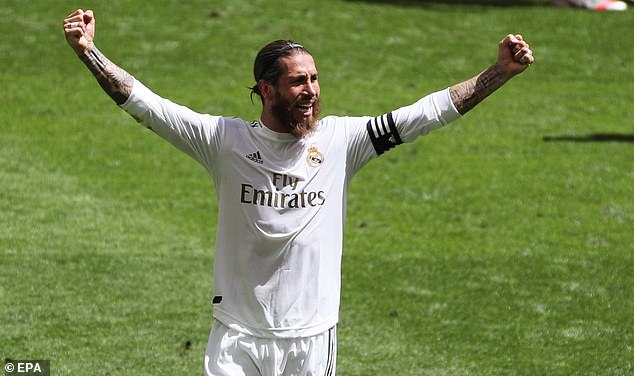 Ramos now has 71 LaLiga goals, that’s more than any other defender. And seeing him score penalties with such efficiency, one can only wonder how many goals he might have scored if Ronaldo had not taken spot-kicks for so long at Madrid.

Ramos says he is not worried about all that. ‘The personal statistics are secondary,’ he said after his goal beat Athletic Bilbao on Sunday.

‘I just want to help the team and win this league. If I had wanted personal recognition or individual prizes I would have dedicated myself to tennis.’

He speaks like a captain and for Madrid he has been their greatest leader since Raul. The legendary striker played his last match in 2010. He was 33 years old. It’s harder for forwards to hold on. 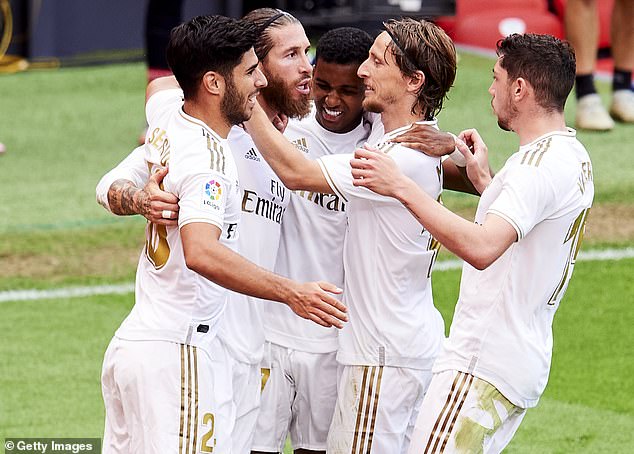 Raul was under-pressure from Gonzalo Higuain, Karim Benzema and Cristiano Ronaldo, with Mourinho coming in and unlikely to overlook those three to stick with the local hero, he packed his bags and went and enjoyed a couple of seasons at Schalke.

It ought to be different for Ramos. Madrid have a shallow pool of centre backs and they don’t have the cash to go and buy a top replacement. There also seems to be dearth in the market right now in that position.

Ramos will cling on at Madrid for as long as his body allows him to. And eventually the club will have to buy Raphael Varane a new partner. Ramos the leader will be much more difficult to replace than Ramos the defender.

As things stand, Madrid need just two wins and two draws to take the title. It will be his fifth league title. He is still captain chaos at times.

Had VAR chosen to draw the referee’s attention to him treading on Raul Garcia in the penalty area on Sunday he might have undone his good work.

But Zidane would have no one else leading the team on the pitch. Ramos might not get the trophy to lift – that could be held back for the start of next season. He might get a new contract to show off instead.