Valencia boss Albert Celades has been sacked after a string of bad results saw his side win just two games out of their last 13 in all competitions.

The club have confirmed that Voro Gonzalez will take temporary charge of the side in a statement released on Monday evening, just a day after their defeat to at Villarreal on Sunday.

Celades was appointed as manager after the dismissal of Marcelino Garcia Toral, but has failed to hit the heights expected of him. 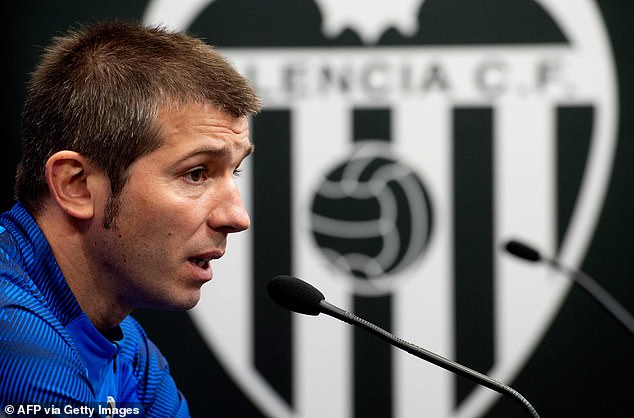 Celades also faced an embarrassing defeat when his side crashed out the Champions League Round of 16 against Atalanta, losing 8-4 on aggregate.

Valencia also suffered a heavy defeat against Granada in the Copa del Rey quarter-final and failed to secure a place in the Europa League.

As it stands, Valencia sit eighth in LaLiga, and have dispensed with the 44-year-old’s services.

The club statement said: ‘Valencia CF have communicated to Albert Celades his removal from his position as first team coach, with immediate effect.

‘The club wish to thank him publicly for his work and dedication during his time at the club -a period in which we achieved qualification for the knockout stages of the Champions League and important victories at grounds where we had previously not won.

‘The club also value his help and contribution since he took over as coach of the first team in a moment of difficulty, and wish him every success in his future endeavours.

From Tuesday, Voro Gonzalez will take charge of the first team on a provisional basis through to the end of the present season.’